An English Heritage Blue Plaque was unveiled in Sir Victor Horsley’s honour at no 129 Gower Street, one of his London homes, on 17th June 2015 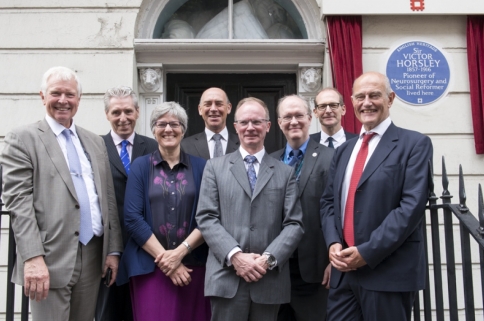 Surgeons from the National Hospital for Neurology and Neurosurgery (NHNN) paid tribute to early pioneer Sir Victor Horsley during a ceremony to celebrate his lifetime achievements.

The plaque (the first in honour of a neurosurgeon) was unveiled by his sole surviving grand-daughter, Corinna Rock.

Sir Victor, who died nearly a hundred years ago, was neurosurgeon to University College Hospital and the NHNN and the first to be appointed to a hospital position in 1886, when he undertook his first brain operation.

The National Hospital didn’t have an operating theatre so he modified a day room. He performed the first operation in the world to remove a spinal tumour the following year.

During his career at the National Hospital he successfully transformed patients’ lives by performing ground-breaking epilepsy, spinal tumour, vascular and brain surgery, in an era where there were no x-rays or antibiotics. He also paved the way for future pituitary treatment, due to his work on the thryoid.

The National Hospital has a ward and department after him in honour of his contribution to neurosurgery.

Retired NHNN neurosurgeon Michael Powell, who campaigned for the plaque, was determined to keep his memory alive:

“When I arrived 32 years ago at the NHNN he was a forgotten man. One of the wards had been dedicated to him and carried his name - but no one was quite sure why. He was just 27 years old when he became the first hospital neurosurgeon in 1886 and was a pioneer and we felt it was important to continue to publicly recognise his achievements.”

In addition to his pioneering neurosurgical work, Sir Victor Horsley was a powerful debater and orator, reforming a number of medical organisations including the GMC and BMA, and was a passionate social reformer who very prominently supported causes such as female suffrage .