This page provides the dates of some key activities in the National Hospital for Neurology and Neurosurgery’s history, including links to digitised photographs and documents. It will be added to and developed over time.

NEW: A history of the National Hospital: in 10 objects
A short video compilation of images of items held within Queen Square Archives, focusing on the development of Queen Square, and the founding and early days of the National Hospital, including the first hospital buildings and early staff members. Please note that the narration is included in the captions on the video, so audio is not essential. Download transcript 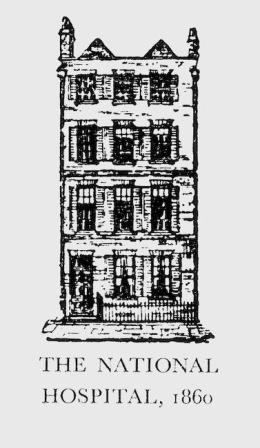 1860
24 Queen Square leased at £110 a year as premises for the Hospital
The National Hospital for the Paralysed and Epileptic is opened in Spring 1860 with 8 beds for female patients. A ward for male patients is opened in June 1860.

1861
Mary Warwick of No. 7 Hayes Court, Soho, the first patient received in the hospital was discharged as “cured”

1866
The next door house was purchased and the buildings were adapted and equipped at a cost of £4000, doubling the size of the Hospital, which now had 36 beds.
Electrotherapy started in first electrical room.

1868
Purchase of premises in Powis Place enabled the Hospital to be increased to 64 beds.
Henry Charles Bastian is elected Assistant Physician to the National Hospital for the Paralysed and Epilpetic.
First Hospital to have day rooms, including books, pictures, music, piano, flowers. Russian and Turkish baths installed.

1870
The Hospital was the first to “venture on the establishment of a Country Branch”: The Convalescent home in East Finchley

1876 Ferrier publishes The Functions of the Brain.
Maida Vale Hospital changes its name to the Hospital for Epilepsy and Paralysis and other Diseases of the Nervous System.

1878
Medical teaching starts at Queen Square.
The journal Brain is founded, with Hughlings Jackson and Ferrier as founding editors.

1881
Powis Place Pavilion is built at a cost of £10,000, containing the Outpatient department and three larger wards.

1885
Albany Wing opened by Prince of Wales, as a memorial to the Duke of Albany whose advocacy largely helped to secure the £60,000 building costs of five wards, Chapel, admin offices and staff quarters.

1886
Sir Victor Horsley’s appointment to the post of Assistant Surgeon. He performs the first operation in the world to remove a spinal tumour.
Gowers’ Manual of Diseases of the Nervous System published.

1890
First school in neurological and neurosurgical nursing in Europe.

1892
National Society for the Employment of Epileptics founded and a 1.5 sq km farm bought in Chalfont St Peter.

1909
Hospital Jubilee. £26,000 raised following upon a collection made by the Duchess of Albany, many departments, including Outpatients Hall, nurses accommodation, electrical department and gymnasium were enlarged and improved. New buildings were opened by King Edward VII on November 4th.

Study by Tooth published in Brain describes more than 500 brain tumor operations between 1901 and 1911, the majority by Horsley.

1917
Four old houses in Queen Square adjoining the Hospital were purchased. In two of these a school of massage and electrical treatment (in conjunction with University College Hospital) opened.

1919
Annexe of 30 beds for discharged sailors and soldiers opened in Queen Square.

1926
Name of Hospital changed by Supplementary Royal Charter to the National Hospital Queen Square for the relief and Cure of Diseases of the Nervous System including Paralysis and Epilepsy.

An orthopaedic surgeon was appointed to the Hospital.

1932
MRC offers to establish a clinical research unit in the Hospital, in 32 and 33 Queen Square, and the Unit began work in January 1933.

A speech clinic starts at the Hospital.

1938
Completion and opening of a large extension of the Hospital, chiefly providing a Surgical department and increased research facilities, including the “Institute for the Teaching and Study of Neurology”. The new buildings were opened by Queen Mary on 19th July 1938. The new Queen Mary wing was constructed in place of the Victorian houses adjacent to the hospital, including a new operating suite on the sixth floor.

1940
The National Hospital suffers bomb damage, and the operating facilities of Queen Square are moved to Haywards Heath.

1942
Dr E.A. Carmichael appointed Director of the Neurological Research Unit of the MRC at the National Hospital.