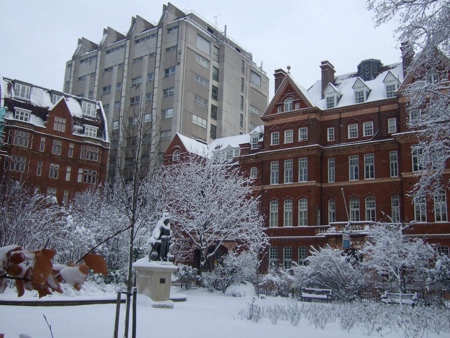 National Hospital for Neurology and Neurosurgery

The National Hospital for Neurology and Neurosurgery has been described as the “cradle of British Neurology”. It was founded in 1860 for the alleviation initially of epilepsy and paralysis and its early physicians included John Hughlings Jackson (1835-1911), Sir David Ferrier (1843-1928), Sir William Gowers (1845-1915), and Sir Victor Horsley (1857-1916). Major neurological writings emanated from Queen Square and many of the important advances in neurological and neurosurgical therapy were pioneered at Queen Square. National Hospital was amalgamated with Maida Vale Hospital in 1948, and the Maida Vale Hospital archives are also housed in the collection. The National Hospital now forms part of the University College London Hospitals NHS Foundation Trust. You can find out more on the NHNN website.

NEW: A history of the National Hospital: in 10 objects

A short video compilation of images of items held within Queen Square Archives, focusing on the development of Queen Square, and the founding and early days of the National Hospital, including the first hospital buildings and early staff members. Please note that the narration is covered by the captions on the video, so audio is not essential. Download transcript

The Institute was established in 1950, as one of the federated Institutes of the British Postgraduate Medical Federation of the University of London. In August 1995, the Institute affiliated with University College London, and formally merged with the College in August 1997. The Institute has retained and developed its close links with the National Hospital and provides teaching and research of the highest quality in neurology and the neurosciences. You can find out more on the IoN website.

The Institute and Hospital in combination form a national and international centre at Queen Square for teaching, training and research in neurology and allied clinical and basic neurosciences.

The Queen Square Library is funded jointly by the UCL Queen Square Institute of Neurology and the National Hospital, and is the recognised specialist Library for Neurology within the University of London. There are records for the Library dating back to the early days of the Hospital, and the basis of the Historical Collections are the books and journals previously held within the Hospital and the former Medical School at Maida Vale, and the private collections of members of staff at Queen Square.

The Library receives over 25,000 visits per annum. Many of these visitors came to use items held in the Historical Collection, and referrals are regularly received from both the British Library and the Library of the Wellcome Trust. You can find out more on the library website.