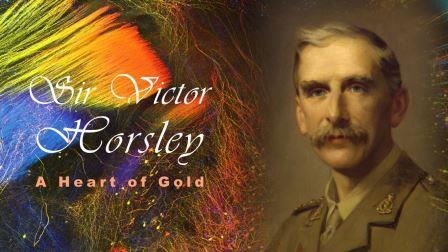 Sir Victor Alexander Haden Horsley (1857-1916), the pioneering British neurological surgeon, passed away 100 years ago – on 16th July 2016. He died young in his 60th year from the effects of heat stroke whilst serving as consulting military surgeon to the Mediterranean Expeditionary Force in Amarah, modern day Iraq, and was buried in the now largely abandoned ‘Amara War Cemetery’. Otherwise robust and healthy, it was only through great self-denial and overwork that Horsley suddenly succumbed to the burning heat of Mesopotamia. He died as he lived; a fearless and painstaking fighter for the common man. His was a most beautiful life of unselfish devotion to others.

This video tribute was made possible by images sourced/licensed from the following collections:

Both soundtracks to the video are by Oliver Scheffner. The first is titled Darjeeling ’(First Flush)’; the second is 'Gelber Tree’. Scheffner is a talented German musical artist with interests in creating ambient electronic productions.

The producer would like to give special thanks to Dan Mitchell (UCL Special Collections), Sarah Lawson (Queen Square Archives), Professor Andrew Lees (UCL Neurology/The National Hospital), Peter Allen (Cranbrook Grammar School), and the imaging team at The Bodleian Library (Oxford University), for making available several important images, or otherwise contributing to the production and sharing of this video.